History of Paris-Brest-Paris (by Drew Buck)

In the first long cycle race, the 600km Bordeaux-Paris, the British unexpectedly took the first three places by riding without rest, G P Mills being the winner in under 27 hours. The event made a great impression on the French public.

Later that year, Pierre Giffard promoted the 1200km Paris-Brest-Paris to demonstrate the practicality of the bicycle. Cycles were sealed at the start to ensure riders used the same machine throughout and entries from foreign riders and women were refused.

207 cyclists started on September 6th, including 10 tricycles, 2 tandems and an ordinary - believed to be the only one to complete the PBP so far, ridden by M. Duval.

Both amateurs and professionals took part, the pros employing crews to carry their gear and 10 pacers each. Charles Terront won, riding without sleep for 71h 22m, and 99 riders finished, some taking several days having stopped at inns overnight. 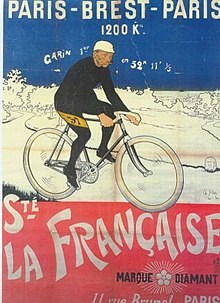 Henri Desgranges divided the entry into ‘coureurs de vitesse’, professional road racers, and ‘touristes routiers’, hard riding tourists, with prizes of 10,000F for the former and 2,000 for the latter.

PBP was held every 10 years since the distance was so great that the pros could not adequately train for PBP and conventional road races. In 1903 Henri Desgranges organised the first Tour de France using stages which allowed the riders to rest. This event was to supplant PBP as the premier road race.

in 1911 the rules were changed to ban pacers and assistance to riders between controls. The pros changed their tactics and stayed together in a pack to Brest. 13 coureurs de vitesse and 120 touristes routiers took part, the winner being Georget in a time of 50h 13m.

The first tourist back was Heusghen, who was then disqualified for receiving help en route leaving Ringeval and Garin (the 1901 pro) with the best times in that category.

1921 - On September 2nd 43 pros and 63 touristes routiers started the event. The number of secret controls had been increased. Mottiat won in 55h 07m and the eighth place went to the tourist Ernest Paul, who had ridden as a pro in 1911, with a 62 hour time.

1931 - Twenty-eight pros and over 100 tourists entered. The touristes routiers were, for the first time, given a 90 hour limit, called ‘randonneurs’, and divided into the ‘allure libre’ administered by Audax Club Parisien and ‘audax’ riders administered by the Union des Audax Cyclistes Parisiens.

The Australian, Hubert Opperman won in 49h 23m and the first randonneurs were Tranchant, Cottard and Ruard with a time of 68h 30m.

Four women finished on mixed tandems (Danis, Pitard, Gorgeon and Du Bois) and Mlle Vassard became the first solo woman to complete PBP. The Pitards were also to ride in 1948 and 1951.

A Frenchman domiciled in London, René Menziès, completed PBP as a randonneur in both 1948 and 1951.

In 1951 only 41 pros in 10 teams entered and Diot won in 38h55m, the alltime record. The first randonneurs were Coutelier and Chetiveau. A British tandem pair entered, but did not ride.

1971 - The last year, until the centenary, shared by audax and allure libre randonneurs. 330 audax riders, split into 17 groups, started 4 days before the main PBP at 0400 and all finished inside 90 hours.

The 328 randonneurs set off with a massed start at 1600 on Monday September 6th.  The British riders were George Davis, Barry Parslow not on trike, the frame had broken - Colin Philips and Jock Wadley. (Seven cyclists finished the audax PBP and started again the next afternoon as randonneurs, Plaine doing this second trip in 55h 42m.)

There was a record to Brest, 20h 26m, from Bonny and first back was the Belgian Herman de Munck in 45h 39m. The first woman being Simone Astie with 79h 38.

1975 - The randonneur event was now every 4 years, the audax riders retaining the five year interval. This was the first time that qualifications were required (a 600k ridden that year) and the last PBP to be run mainly on main roads as, tragically, two riders were killed.

There were 714 starters, of whom 19 were British. First back were De Munck and 2 French riders, Cohen and Truchi, in 43h 27m.  The first women were Chantal de la Cruz and Nicole Chabriand with a 57 hour time. Steve Nicholas gave a detailed account of the British riders in his article reproduced in Arrivée number 20, New Year 1988.

1979 - The entry qualification became a full Super Randonneur series. 1766 riders started and the start time was split with the 90 hour riders off at 4.00am. 1573 finished, including 49 British. The first back were Piguet and Baleydier in under 45h.

1979 - The entry qualification became a full Super Randonneur series. 1766 riders started and the start time was split with the 90 hour riders off at 4.00am. 1573 finished, including 49 British. The first back were Piguet and Baleydier in under 45h.

Audax UK’s Paul Castle had a successful ride but died shortly afterwards in a road accident while riding back to the coast.

First in were the Belgian, De Munck, and France’s Bernard Piguet with under 44 hours. The first woman was American Sue Notorangelo, setting the women’s record at 54h 40m. In all 15 countries took part.

Audax UK’s Debbie Llewellyn was presented with a watch for being the youngest rider.

Audax UK South East were given one of the Fanions de la Ville de Brest.

1991 - The Centenary edition, once again audax and allure libre riders shared the road. 3281 randonneurs started and about 2500 finished, including 149 British.

The new venue at St Quentin-en-Yvelines, south west of Paris, was popular but a high abandonment was blamed on later start times of 20.00, 22.00, and 05.00, compounded by a compulsory afternoon “Prologue” into Paris.

Peter Gifford and Noel Simpson lowered the tandem trike record to 81h06 and Mick Potts was the first rider back with a saddlebag, his 52h 42 time and 25th overall placing being a British best.

Nicole Chabriand of France was first woman back in 59h 43 and Scott Dickson again first in 43h 42.

1995 - The 13th PBP randonnée, with a slightly reduced entry, though overseas interest increased and 181 British finished.  Two significant changes in the regulations - tri-bars were banned, while the rule requiring mudguards was removed.

Benign weather conditions saw a group of nine finish in 43h 20, a randonneur record. The women’s record was demolished when Brigitte Kerlouet came in shortly after the leaders in 44h 14.

Though British riders were amongst the slowest, with an average finish time of 82h 37, 303 out of 335 riders finished, a 90.4% success rate which reflects the Audax UK self-sufficiency ethos. The course was recognised as over-distance and an extra two hours allowed.

First solo Briton back was Richie Tout in 54hrs plus - riding without support.

There were 4958 male entrants and 354 female, the average male age being 49 and the average female 45. 275 Audax UK riders finished, the youngest rider being Philip Norman who celebrated his 19th birthday during the event.