A relaxed version of the BBC London BRM event, run as a BR with a min speed of 14.3kmph over 43hrs elapsed Witness the beauty of the Peak District and the emptiness of the Fenlands over a weekend ride from London. A ride of two halves, with an officially hilly (AAA points!) rolling route outbound culminating in a gentle traverse of the Peak District. Once past the halfway point though, all of that is behind you and it's mostly flat all the way home. The route includes two off-road sections, the Monsal Trail out of Buxton and then after the night control at Egmanton Village Hall, the NCR647, both converted railwail lines (flat!). Road surfaces are rideable on road tyres, about half and half compacted gravel and blacktop. HQ is Chalfont St Peter Community Centre where we will provide our internationally renowned 'No-Mod-Cons' accomodation for those who fancy a lie in before the depart on Saturday morning. Entry also includes accommodation on Sunday night with breakfast and Supper, and R&R options at Egmanton Village Hall (340k). If the route appeals but you'd like a more of a challenge, checkout BBC LONDON which is validated as an ACP BRM with a time limit of 40h hours. 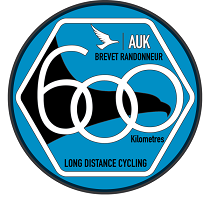